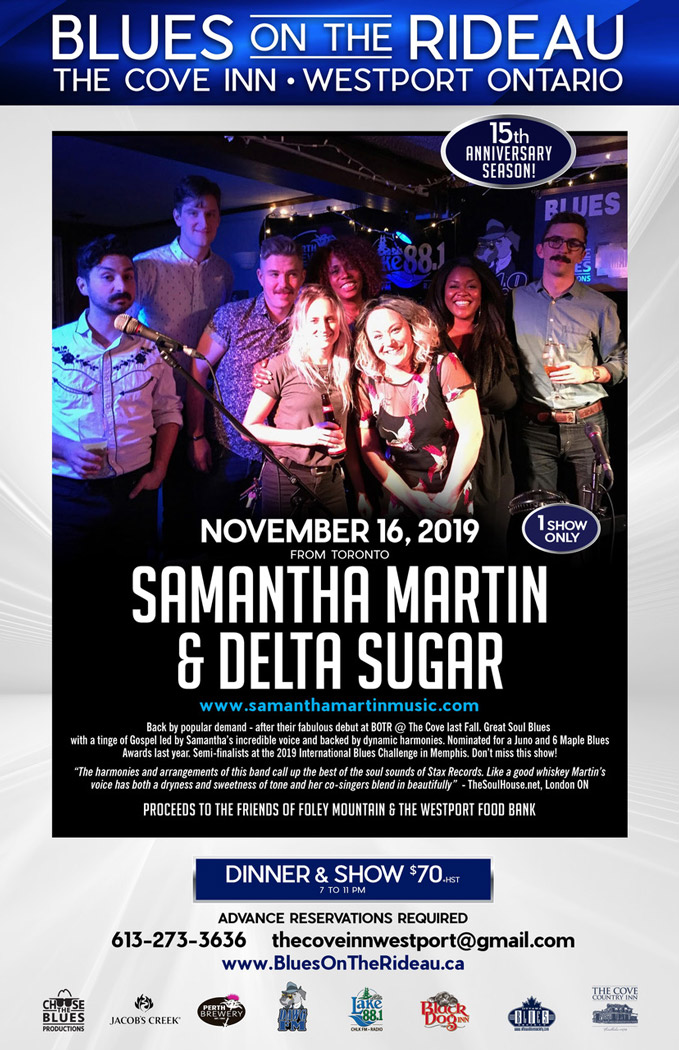 Blues on the Rideau with Samantha Martin & Delta Sugar

Born in Edmonton, now a resident of Toronto Samantha Martin and her band Delta Sugar played BOTR at The Cove for the first time last October and blew the doors off the place. That’s why they’ve been invited back this season! Their debut CD “Send The Nightingale” received major international airplay when it came out in 2015 and earned her 4 Maple Blues Award nominations (she was nominated for another 4 this past year – and a Juno Award). Samantha’s dynamic Blues/Soul/Gospel voice reminds you of some of the greats – Janis Joplin, Big Mama Thornton and Koko Taylor all come to mine. It’s complimented beautifully by her two great femaie co-singers – Sherie Marshall and Mwansa Mwansa with a full rhythm section behind them lead by guitarist Michael McCallum. Their latest record “Run To Me” released in April 2018 took an even larger leap forward with special guests Steve Marriner and Suzie Vinnick. The record immediately went to #1 on the Roots Music Chart, #14 on the U.S Blues chart and received major airplay around the world. Since then they’ve performed at major festivals across Canada and did a 10 country/75 show tour of Europe last year where they were so well received they’re headed back again this year. We’re very lucky – and very pleased – to have them back to play BOTR this season. You’d better get out and see them when they’re here though before they get too big to play smaller venues like this one. Both shows are sure to sell out so once again, book early if you want to be there.