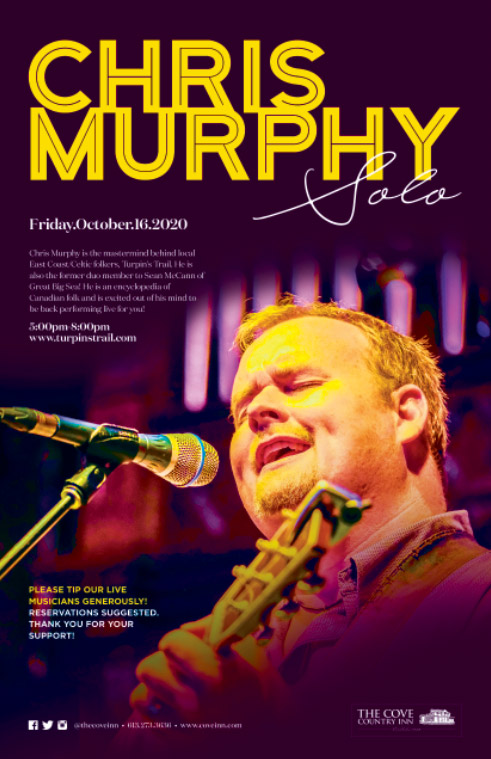 Join us for live music at The Cove on Friday October 16th from 5-8pm with Chris Murphy (of Turpin’s Trail).

Chris has been the frontman of local favs, Turpin’s Trail which is a Kingston-based Celtic/Folk quintet consisting of Brian Flynn, Jon McLurg, Chris Murphy and Noah St. Amand.
With a closet-full of over a dozen instruments and a wealth of great original & traditional songs and tunes, Chris and Turpin’s Trail bring together five of Kingston’s most accomplished musicians. Individually, the members of Turpin’s Trail have shared the stage with the likes of David Francey, Sarah Harmer, Ron Hynes, J.P. Cormier, Fred Eaglesmith, Leahy, and the Masterless Men. Turpin’s Trail has played such great venues as the Thousand Islands Playhouse in Gananoque and Kingston’s K-Rock Centre, and embarked on multiple tours of Atlantic Canada as far east as Newfoundland. Until recently, Chris was also playing in a duo with former co-frontman and guitarist/songwriter Sean McCann of the beloved East Coast sensation GREAT BIG SEA!
His sense of rhythm, tradition and performance are top notch. We always love it when he returns to The Cove!