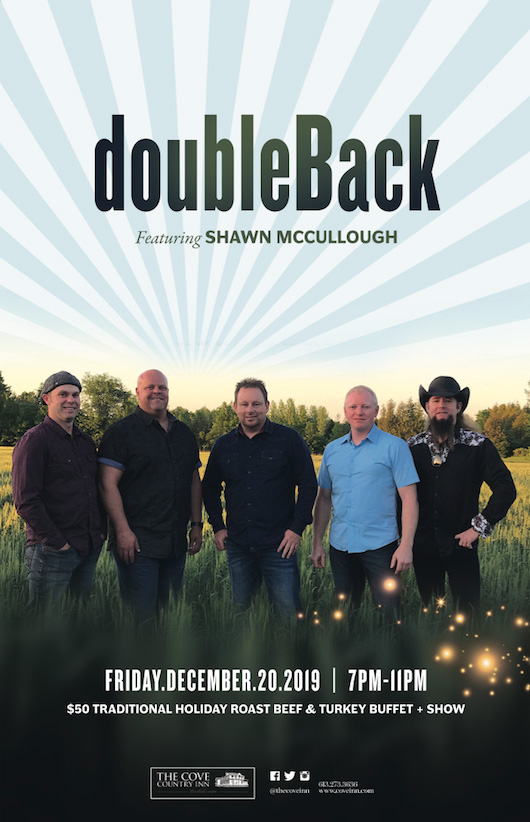 Come and let us host your Christmas Business Party or get together with friends and family for a Traditional Holiday Buffet with Turkey, Roast Beef, all the trimmings and dessert and a Night out on the town with top notch Country Music from members of Shawn McCullough’s band – Brea Lawrenson’s full band!

DoubleBack is Ottawa’s Valley’s premier country/rock band. The band is made up of some of Ontario’s finest and most seasoned musicians. Their versatility and range of music keep crowds entertained and on the dance floor night after night. A typical show can include anything from new to classic country, new and classic rock, and even a little celtic thrown in just to mix things up. Featuring five musicians who love what they do, this band can play all of your favourite songs and keep you wanting for more.

Guitar player/singer/alternative lyricist Shawn McCullough has been a musical fixture on the Eastern Ontario scene for years now. Shawn has played and toured with Canadian Country star Jason McCoy (The Roadhammers) and has been a part of Telecaster supergroup The Telebastards featuring Steve Piticco, as well as a member of DoubleBack with Wade Foster and John Wilberforce. He is highly in demand as a session musician and sideman for his incredible skill, wit and stage presence. He has a solo record to his name “This is Me” and is currently performing with rising Country star Brea Lawrenson. Speaking of Brea, The Shawn McCullough Band IS Brea Lawrenson’s back up band! Wrapping up last year with two showcase appearances at the 2014 CCMAs in Edmonton, Brea started off this year as a 2015 CMAO Nominee for Female Artist of the Year and Rising Star, and the release of her third album ‘#Brealieve’. Brea joined with Shawn McCullough and his band Double Back this spring to perform at festivals and fairs such as RBC Ottawa Bluesfest, Kemptville Live Music Festival, opening for great acts from Brett Kissel to Tom Cochrane to The Road Hammers. Five songs from Brea’s #Brealieve album have been released to Canadian Country Radio and all charted in the top 100. Brea’s single “Canadian Pearl” was played on radio stations across Canada and is climbing the charts.

On Friday December 20th, The Cove will be the place to be!