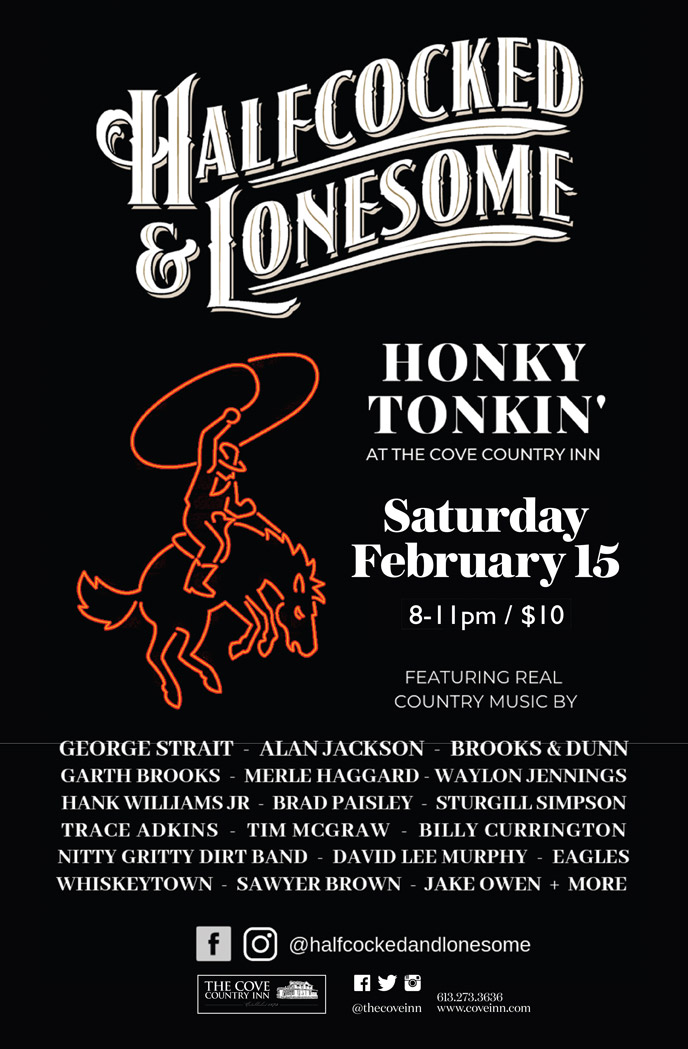 After a massively popular night in August, we knew we had to have them back but things have been tricky in doing so! Here we are in 2020, the return of the Honky Tonk!

Halfcocked and Lonesome…They started in 2015 when Andrew bought a pedal steel guitar and found that a local Ottawa bar wanted a honky tonk house band. So they pulled together some country loving friends and started a band. A few friends have come and gone from the band but they’ve kept the tunes rolling. They’ll always play some golden classics and a few new country tunes, but focus on what XM Satellite Radio calls “Prime Country”. The epic era from the late 80’s to early 2000’s of George Strait, Brooks & Dunn, Alan Jackson, Garth Brooks, Tim McGraw, John Michael Montgomery, etc. These artists put honky tonk back into country music in a way not heard since the Bakersfield days of the 60’s or the Outlaws of the 70’s. It’s when cowboy hats, pedal steel guitars, and swinging shuffles became cool again.

So expect raw, twangy honky tonk that you can dance to or just tap your feet and drink to. Your call. Check out their website to see their upcoming shows, meet the band, and dig through their instagram feed for pictures and video clips of what to expect.

PS Steel player Andrew Rasta is our resident Sommelier for our seasonal wine dinners and wine rep for Lifford! Stop by the Cove on Saturday February 15th for this cool event. $10 Cover.