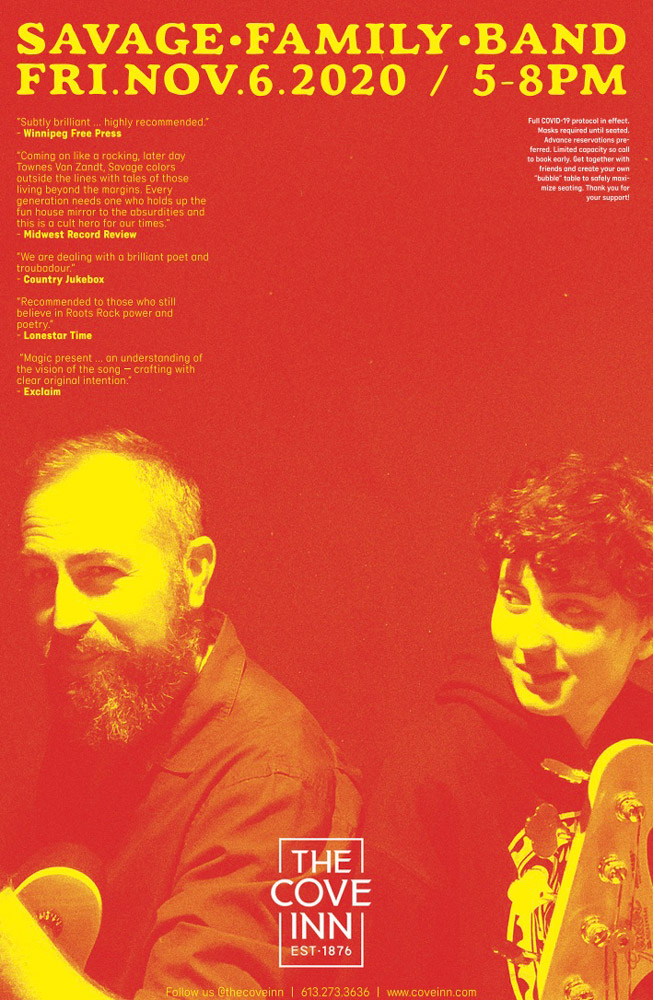 Join us for live music at The Cove on Friday November 6th from 5-8pm with Savage Family Band.

A band born out of a pandemic. When COVID-19 hit in March, songwriter/ guitarist Tom Savage turned to music as a way of interacting with his daughter Bella, who has been playing bass for the past two years. It was a fun way to keep them busy while he was unable to work, and she was home from school.  Weekly rehearsals brought about the creation of new music that has delved into Blues, Jazz and Funk territory. Gigs were soon to follow and now there seems to be no stopping the Savage Family Band!

Tom Savage is what one might refer to as a triple-threat. One part truth-telling troubadour, one part death-defying guitar slinger, and one part Country Blues h…owler. Each facet of his formidable on-stage persona carefully crafted over a 20+ year devotion to the composition and performance of song. Tom is a true believer. A disciple of melody and harmony and tempo and timbre. An evangelist preaching to anyone who will listen of the healing and meditative powers of music. Pouring his heart out of his throat every night, while simultaneously shredding his fingertips in his relentless assault on the beat-up 1966 Guild acoustic he adores.

Tom’s music comes from places occupied by Townes Van Zandt and Bruce Springsteen, but also lurking in the shadows of influence are Jimi Hendrix and Jimmy Page in one corner, and Wes Montgomery and Freddie Robinson in another. Give a teenaged kid a cassette player and a radio dial ( circa 1988) and it is the equivalent of throwing the contents of the entire refrigerator into a blender. You have no idea what flavour the combination will result in. This is the time when many musical seeds where planted in Tom’s psyche, thus the beginning of a lifelong journey.

Where does he stand today? A writer of Country and Folk songs, sung in a weathered, emotive voice with a hint of a Bluesman’s growl, accompanied by fiery and fast rock n roll guitar licks (these days Savage opts for the acoustic guitar, occasionally mandolin, rather than reaching for the electric). Tom Savage is not your average folksinger.

***All Events Subject to Change. Please Call for Reservations***