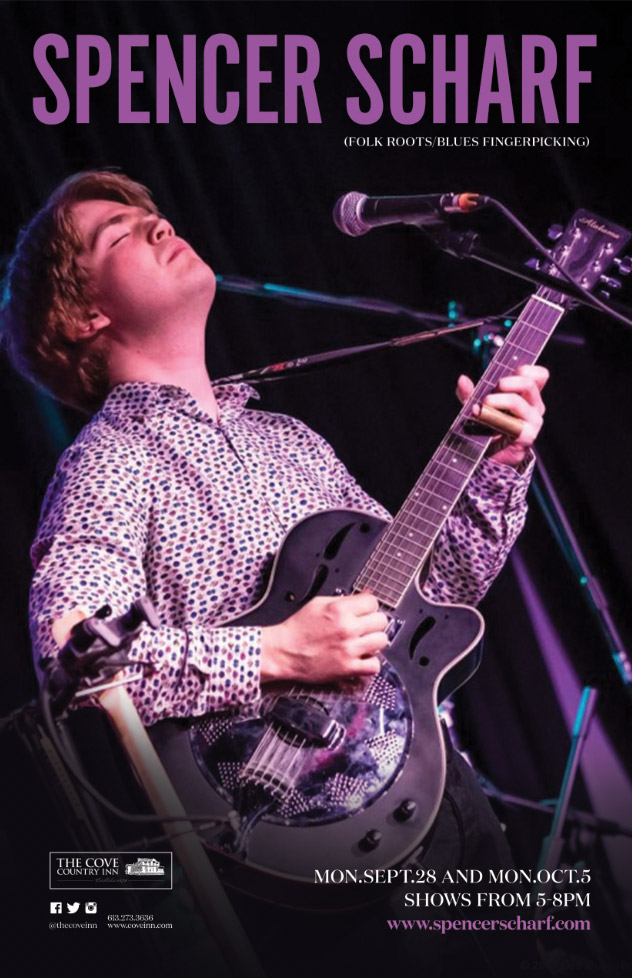 Join us for live music on The Cove’s Outdoor Patio from 5-8pm with Spencer Scharf.

“You know the Blues; it makes me feel alright,” sing the rich and smooth tenor vocals of Ottawa-based Spencer Scharf.

His versatile Folk and Blues sound can be heard on a variety of musical instruments: 6-string, 8-string and 12-string guitars, a resonator, cigar box, banjo, mandolin, ukulele, piano/keyboards and hard driving harmonica.

Spencer’s ability to read the crowd gets him invited back to many venues and private events, as he chooses melodic and intricate instrumentals, belting Blues, or anything in between. His combination of technical skill and onstage charisma has led to him being called “an absolute genius” by AJ Sauvé, RBC Bluesfest’s Director of Media Relations.

While the Folk and Blues multi-instrumentalist has more than 400 cover songs in his repertoire, it was his 3rd album, I Can’t Hide (2014), that began Spencer’s road as a songwriter. He followed that with his 2017 album Times of Change:

“Spencer’s songwriting is evocative, his singing is filled with emotion, his arrangements and instrumentation serve the songs well, his originality and artistry shines through…I hear the bittersweet heartache of the deepest blues when he sings about his grandparent’s home; I hear the train a comin’ when he sings of ghosts; and I hear how big his heart is and how deep his groove is when he sings about ‘playing songs on refuse people can reuse.’” – Adrian Matte, Ottawa-based musician & educator

“One of the most gifted…musicians in Ottawa is Spencer Scharf. He’s a multi-instrumentalist who dabbles in blues, folk, folk-rock and indie-rock. He’s also a rarity – a finger-plucker on the guitar…let Scharf teach you a lesson on fine music.” – Ben Yung, The Revue.