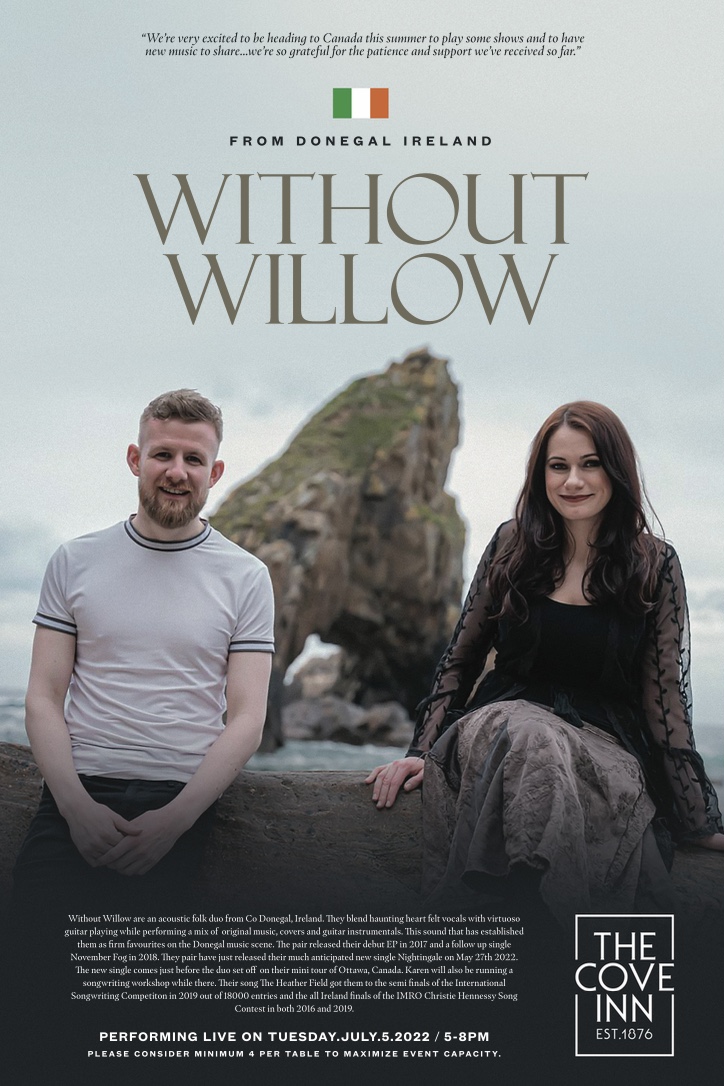 Without Willow Live at The Cove

Please join us at The Cove Inn on Tuesday July 5th, 2022 from 5-8pm for very special guests: Without Willow.

Without Willow are an acoustic folk duo from Co Donegal, Ireland. They blend haunting heart felt vocals with virtuoso guitar playing while performing a mix of  original music, covers and guitar instrumentals. This sound that has established them as firm favourites on the Donegal music scene.

The pair released their debut EP in 2017 and a follow up single November Fog in 2018. They pair have just released their much anticipated new single Nightingale on May 27th 2022.

The new single comes just before the duo set off  on their mini tour of Ottawa, Canada where they will be appearing at the Almonte Celtfest July 3rd, as well as  shows in The Cove Inn on July 5th, Red Bird Live July 7th, Little Red Wagon Winery on July 10th. Karen will also be running a songwriting workshop while there.

Their song The Heather Field got them to the semi finals of the International Songwriting Competition in 2019 out of 18000 entries and the all Ireland finals of the IMRO Christie Hennessy Song Contest in both 2016 and 2019.

“We’re very excited to be heading to Canada this summer to play some shows and to have new music to share. It’s been a while since we released anything but we’re so grateful for the patience and support we’ve received so far”

Love this event? Share it now with your friends!